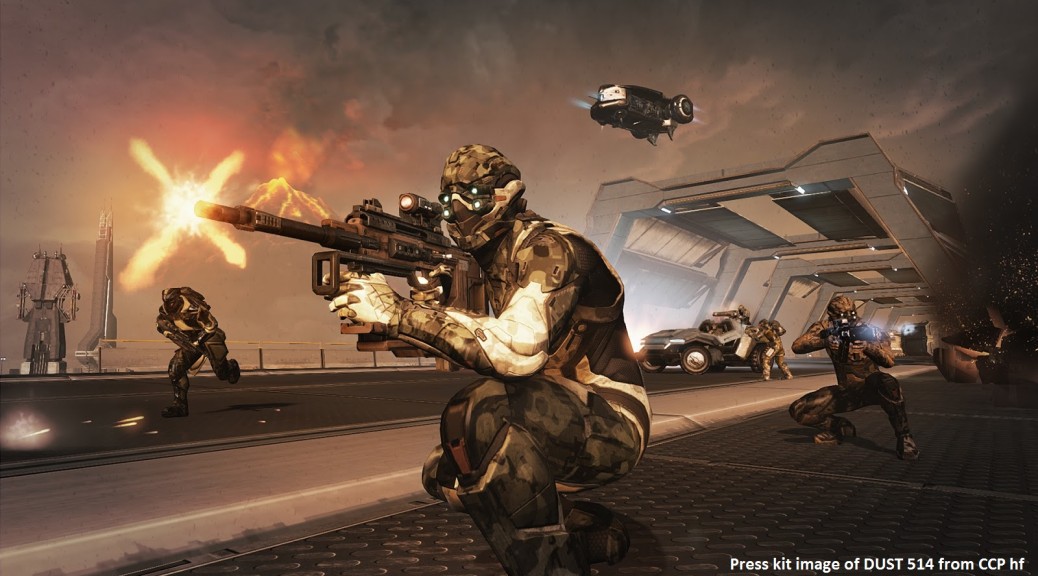 It appears to have come a significant way since its release in terms of having bugs removed. I’ve still found a few glitches where the game can’t decide on your exact location, but they’re usually resolved once someone forcefully respawns you. There are also a few glitches with using a keyboard and mouse instead of the typical controller setup — sometimes the keys it tells you to use just don’t work, and sometimes it tells you to use a controller button instead. I’m using a keyboard-mouse because I’ve not been able to get used to aiming with the PS3 controller (the sensitivity always feels wrong to my XBOX-trained hands).

But chief among possible grievances is that the game types seem extremely limited. (I should say at the outset that I’ve not joined a major player-owned corporation, so there might be things I’m missing here.) There are three game types for regular matches: “Ambush”, which is your standard kill-everyone mode with a time limit and a ‘clone limit’ of 50; “Domination”, which is a standard King of the Hill mode and which has a ‘clone limit’ of 150; and “Skirmish”, which is a multiple hill variant of “Domination”. That’s it. The ‘clone limit’ mechanic (each time you respawn you start in a new clone of yourself — a technological link back to EVE that’s fictionalised in the novel EVE: Templar One if you’re interested) and the abstracted victory conditions add unpredictability to the end point of the match; the match ends either when your team’s out of clones or when you destroy the opposition’s Mobile Command Centre by maintaining control of an auto-firing cannon for longer than the other guys. And despite taking place on differing planets throughout the EVE game world, there are a fairly limited number of maps. Perhaps humans in the distant future take the term “parallel Earth” a little too literally and just terraform planets to look identical.

What soon becomes apparent is that DUST 514 relies not on variety but on unpredictability, setup, strategy and cooperation in equal parts to make gameplay interesting. In hindsight, and being an EVE Online nut, I should have expected this from CCP (who develop both DUST and EVE) because it’s rather similar to the EVE philosophy. Setting up a dropsuit fit is almost absurdly similar to fitting out a ship in EVE, even to the point of using many of the same fictional technologies. As an EVE nut it’s sort of comfortingly familiar, but I’m certain that non-EVE players would find the translation of EVE‘s steep technical learning curve into the FPS genre a bit odd.

As for cooperation, it apparently happens sometimes. There are up to 16 players per side, which is enough to pull off some expert manoeuvres if you’re more coordinated than the other guys. This happens, though most games seem to have one or two organised squads and a much larger crew of lone rangers. I’ve never heard any comms on the chat channel for the entire team, so I’m guessing the squads use their own comms channel. Good one, guys. While this makes strategising fairly challenging, there are enough support roles built into the game to make tacking yourself on to someone else’s strategy a moderately rewarding play style. You can be a medic if you want, reviving your incapacitated team mates to prevent using up valuable clones. If you’ve got the skills, you can be a heavy gunner, or drive or fly a vehicle. Haven’t played around with those myself, don’t have the skills. What I have been mucking around with is being a sniper.

I think the way DUST does sniping is the biggest surprise I’ve had from this game. I’m actually better at sniping in this game than at regular soldiering (at which I’m fairly woeful). But I couldn’t possibly attribute this to my own skill. DUST‘s small collection of maps and game types hides the fact that the maps are far larger than would normally be required. When you’re a regular soldier, you find the space between your initial spawn point and where all the action happens quite annoying. But when you’re a sniper, the exceedingly generous amount of land surrounding the battle arena provides you with a plethora of tiny hiding places. Judging by the number of gullies, small mounds and structures along the ranges of hills at the periphery of these maps, I’d say the maps were designed partially with snipers in mind. You’re never safe anywhere, of course, but many of these hiding places are sufficiently far from where anyone would normally be looking that you can get a few kills in before you’re noticed. And when you are noticed, it’s usually by another sniper. Although sniper rifles seem underpowered, they’re still useful enough to provide support to your team mates closer to the action.

What’s more, in typical EVE-like fashion your setup plays a significant part in your sniping effectiveness. You could choose to buy-to-win through microtransactions, but who’s that much of a schmuck? It’s all about the slow grind. Skilling up, buying new gear, modifying your dropsuit to be less scan-able and boost your damage, and all the while honing your actual skills of aiming and finding good hiding spots. I dare say that to most FPS players this would be tedious, but to anyone familiar with EVE it’ll feel fairly natural.

But then, I suppose that’s one reason why DUST hasn’t really worked. It’s an FPS that appeals more to the players of a relatively small and infamously slow MMORPG than to regular FPS players. That DUST doesn’t bore me is probably more of a testament to how engaging a game EVE can be than to any particular qualities of DUST itself. DUST ostensibly builds a playable game from very few conventional FPS elements by adding a few RPG-like elements to the mix, along with its much-touted ‘orbital strike’ mechanic (which, by the way, I’m yet to see — I’ve seen “warbarge strikes” but they’re apparently weaker than a proper orbital strike by an EVE player, and I’d honestly be surprised if anyone in EVE was bothering). But underpinning those RPG-like elements is the RPG they were borrowed from. Take away that RPG, its world, its technologies, its story, and DUST would be nothing.

I should be bored. I’m not sure I should even be professionally interested — the four instances of music I’ve found in the game are basic loops that seem unrelated to the music in EVE. But, just like in EVE, I’ve kept returning just to see what will happen next, and whether the latest tweaks to my setup will give me the advantage against strangers in far-flung corners of the galaxy.

Wow. Busy semester. I’ve never been a particularly good blog updater type, but my tardiness has been quite annoying this time around. Here are a few things I’ve been meaning to write about.

Skype
I’ve recently had the opportunity to give the same paper in two very different contexts. Once via Skype to the Ludo 2014 conference in the UK, and once in person to an in-house symposium for students at Sydney Conservatorium of Music. The excellent folks at the Ludo 2014 conference set up a Google Hangout for a few of us long-distance “attendees”, in addition to Skype link-ups for presenting conferences. Really nice of them to do both, as it allowed me to sidestep that pesky other-side-of-the-world thing, and not just to say my piece and then leave. I could engage with the conference and the other speakers despite being at home in Sydney, which I found quite rewarding.

Presenting a paper via Skype is actually quite challenging. With the audience on the other side of the world, the Skype window small enough on my screen that it doesn’t obstruct my paper, and the low-fi sound quality of Skype, there’s remarkably little feedback to be received. No turning pages of notebooks to be heard, no amused grins or muted chuckles at jokes, not even a bored expression to let you know how you’re going. You’ve just got to forge ahead, trusting that your microphone isn’t broken and that Skype hasn’t dropped out and left you with a frozen image or something. And you notice all this in your first ten seconds, and by twenty seconds in you realise it’s going to be like this for the next twenty minutes. But then they clap politely at the end, you realise it all went fine, and you answer some questions while breathing deeply and pondering a walk to the kitchen for a large glass of wine. Giving the paper in person at the Con felt substantially easier, but I’m grateful for the chance to be able to present to Ludo 2014. I think being able to telecommute is a pretty important skill for someone conducting research in such an isolated country.

The Wolf Among Us
This game (well, the first four episodes of it at least) is superb, almost to the point of being annoying. Having recently spent a considerable amount of time analysing L.A. Noire and a considerable amount of effort trying to place it within the noir tradition, it grates to see a game that fits the tradition so easily. But it only grates a little, because it’s awesome.

And something I’ve noticed about this game is how surprisingly well the music works considering it’s the second least noir thing about the game (after the fairytales). It’s very synthy, and more “artificial” than “gritty”, but to my mind it fits the game rather well. I’ll try to figure out why when the fifth episode comes out

The Walking Dead
Never shed a tear in a video game before. That’s something new. I’ve recently bought Season 2 in the Steam Summer Sales so no spoilers.

EVE Online
My corp and I have moved out into wormhole space (as of a few months ago). EVE feels and sounds quite different out there. It’s got a brooding, ominous soundtrack – at least for the first little while, then the distinct lack of variance becomes the crushing loneliness of empty space. I’ve been listening to New Eden Radio a lot, put it that way. I know that nullsec has an adaptive soundtrack that gets “darker” according to the number of ships killed in the last 24 hours, but I’m yet to see whether wormhole space has a similar mechanic because there’s nobody there. And, to be fair, when there is someone there it’s usually me that’s on the dying side.

Skyrim
I’ve never gotten into Skyrim as deeply as I got into Oblivion, but I’ve been playing it sporadically lately and am yet again impressed by how beautiful a world it is. Top marks.